On April 17th 2014, The City of Chicago announced that it would create a task force to look into the best potential location in Chicago for The Lucas Cultural Arts Museum, alighting rumors that after being rejected by the Presidio Trust in San Francisco, Filmmaker George Lucas had set his sights on Chicago as a potential location for what Lucas has referred to as “an anthropologocial museum of visual storytelling.”

At the Presidio, the creator of “Star Wars,” and “Indiana Jones” offered to build and self-endow a $700 million, 95,000 square foot museum to house his nearly $1 billion collection of artwork, ranging from paintings by Norman Rockwell, comics from Mad magazine, and digital stills from the movie Shrek. Lucas has loosely argued that the museum will draw young people to the area that would otherwise not be interested in the park, located just steps away from the Golden Gate Bridge. Lucas also offered this statement about the Bay Area on the Lucas Cultural Arts Museum website:

“The Bay Area has always been home to forward-thinkers and artistic innovators-people who push to do things that haven’t been done before. Men like Eadweard Muybridge, Philo Farnsworth and Steve Jobs. Companies like Pixar, Adobe, and Facebook. There’s a history of invention here that’s as exciting as it is infectious. That’s one of the reasons why I’m here, why I raised my family here, and why I chose to start my own business here. It’s also why I chose this remarkable region for a new museum.”

The Presidio was once the epicenter of military operations in the American West during World War II, but its history began as a military garrison in the 18th century. Many of the 800 some historic buildings, scenic vistas and wooded areas contribute to its’ status as a National Historic Landmark, a unique designation given to only 2,500 historic resources on the National Register of Historic Places. This idyllic location, bordering the shores of both San Francisco Bay and the Pacific Ocean, represents a unique partnership between the National Park Service and the Presidio Trust. The Presidio Trust Act calls for “preservation of the cultural and historic integrity of the Presidio for public use,” and since the park was spared from the auction block in 1996 many buildings have been restored, and brownfields sites cleared to make this a financially independent, desirable mixed use area with ample public space. The Presidio is also the home to Lucasfilm’s Industrial Light and Magic and Lucasfilm’s online offices. So why was Lucas’s plan rejected if he already has a presence there?

The seven member board of the Presidio Trust shot down Lucas’s proposal in February, claiming that it just wasn’t right for the site, an eight-acre parcel known as Chrissy Field, an open space with waterfront access now used as a public recreation area. Similar proposals were also shot down, echoing the commitment of the Trust in terms of the Presidio’s integrity and sensitive development. Lucas isn’t done working on his plan to build a museum in his beloved California. An alternate location has been suggested by the Presidio Trust, and his hometown of Modesto has also expressed interest.

So why does Chicago care about bringing the Lucas Cultural Arts Museum Here? It shouldn’t. But we are coming up with dumb ideas anyways. Let’s discuss two of the worst ideas.

In true Chicago form, no discussion about the significance of the museum is able to happen without establishing a connection between George Lucas, the creative empire that is Lucasfilm, and Chicago. George Lucas’ wife is a native of Chicago. That’s it. There is no other connection. A sketchy Mexican bar in Pilsen didn’t inspire the Mos Eisley Cantina. He didn’t see Ewoks in the trees in Lincoln Park. The campus of Wilber Wright College didn’t inspire the interior design of the Death Star. Sorry. 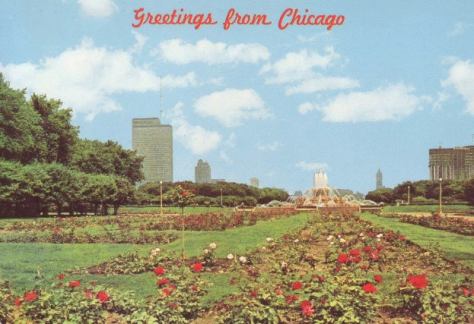 Some have suggested that Grant Park would make a good location. There are some major problems with this. In 1836, public officials overseeing construction of the Illinois and Michigan Shipping Canal parcelled out the lakefront property that would eventually become Grant Park, legally designating it as “Public Ground — A Common to Remain Forever Open, Clear and Free of any Buildings, or other Obstruction Whatever.” This ordinance is perhaps one of the most well-known in Chicago, and while it has served to protect Chicago’s lakefront in the face of decades’ worth of development challenges there have been some narrow misses, the most recent one being the controversy surrounding the Chicago Children’s Museum’s interest in relocating to Grant Park in 2007. Public outcry created a public relations nightmare for the museum, and the plan was scrapped in favor of a new site on Navy Pier. Grant Park’s proximity to the Loop, the Magnificent Mile and Navy Pier might make this site an attractive but poor option for a museum once again, and any museum with a $700 million dollar budget behind it has ample room to navigate the legal tangles of Grant Park. This is not outside the realm of possibility considering Richard J. Daley was a supporter of the Children’s Museum Plan, and it might already have been suggested by the task force. The price could very easily be right if Lucas was to offer additional philanthropic funds that the City of Chicago could capitalize on.

The Uptown Theater, located in Chicago’s Uptown neighborhood, was designed by architects C.W and George Rapp for the Balaban and Katz theatre chain. The Uptown Theatre, built in 1925, is listed on the National Register of Historic Places and is a notable Chicago Landmark. In what could possibly be one of the most unfortunate stories of long-term preservation by neglect, the Uptown has been dark since the J. Geils Band played a concert there in 1981. No immediate plans for demolition have ever faced the Uptown Theatre, but decades of deferred maintenance and its seemingly constant flux in ownership have kept the building under the radar of organizations like Landmarks Illinois. As recently as January, the Uptown Theatre had its heat turned off, and a 30-foot icicle had formed in the basement. This area of Uptown is a well-known TIF district, and with other smaller scale entertainment venues like the Rivera Theatre and the Green Mill located steps away, bringing the Uptown Theatre back as an entertainment venue similar or congruent to its original use seems like the ideal option. Mayor Emanuel himself even made comments after being elected regarding how he would like to see Uptown as Chicago’s newest entertainment district, but it never happened.

Friends of the Uptown have been lobbying hard via social media to bring the Lucas Cultural Arts Museum to the Uptown Theatre. Perhaps a former theatre housing a collection of artwork that has inspired and contributed to film culture is an alternate take on adaptive re-use, but that argument is a loose one. In Presidio, Lucas proposed a 95,000 square foot museum on what is essentially a raw land sight. How will the Uptown, at a paltry 46,000 square feet ever house that without extensive (and insensitive) renovations? Did we forget what we learned just a decade ago, when we turned Soldier Field into a spaceship? Uptown is a densely developed urban neighborhood, with little room for the infrastructural changes that will affect it once a $700 million, privately funded, nationally recognized museum comes to the area.

And what about parking? This museum will require acres of it, which means that the site chosen will haven an Atom bomb effect in terms of parking in the area. From a preservationist/planner/Urbanist standpoint, this means that buildings that may contribute to the scale or overall sense of place in an area, but aren’t technically or legally architecturally significant might be more financially viable as surface parking lots to their owners. This is a particular concern that should be put in sharp focus for those that believe the Uptown Theatre might make an ideal spot.

Despite already having Lucasfilm as their neighbor, the Presidio made the right choice in turning down Lucas’s plans for a museum in their backyard, and there are even fewer reasons for Chicago to say yes to a large-scale, high-traffic project that doesn’t relate to our existing culture here. The task force in Chicago will report to Mayor Rahm Emanuel in May on their ideal sites for the Lucas Cultural Arts Museum. Perhaps the “force will be with them” and the findings will conclude that the ideal site is somewhere on the planet Tattooine. Or California.

The City of Chicago has created a website where residents can submit ideas and recommend sites for the Lucas Cultural Arts Museum. You can access it here.