After what seems like months of nail biting, deliberating font sizes, changing themes, agonizing over photos and vacillating between my audience as preservationists, colleagues, friends or simply no one at all, Blaservations is finally online.

I’ve created Blaservations as a place for me to share my fascination with buildings, research, history (no matter how big or small) and my environment. Like many people in preservation and most people in Detroit, I lead with my heart. I’d like to begin by sharing one of my favorite environments with you, gentle reader. 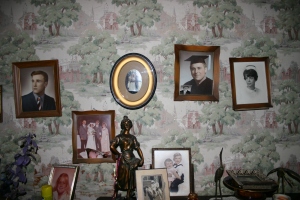 This is the east wall of the dining room of the home of my grandmother, Blanche Blasius, located in Highland Park, Michigan. She and her husband, Robert moved into the house with their four children, Bobby, Cheryl, Keith and Larry in 1965. Robert, or R.B. as he is affectionately referred to was a motorcycle officer in the Highland Park Police Department for over 38 years. R.B. passed away in 1991.

Highland Park is a tiny enclave of the City of Detroit that boomed during the heyday of the automotive industry. It encompasses less than three square miles, and for the majority of its history functioned as a community independent of Detroit (Highland Park is currently being provided city services by both Wayne County and the City of Detroit, but with its’ own independent police force, Mayor and city council) Most of the housing stock in Highland Park are reflective of its most affluent and prosperous time, from the turn of the century until the 1930s.

The first crumbs of interest for preservation were fed to me in Highland Park. By the time I was born, Highland Park had become a shacktown of neglect; abandoned churches, homes with their roofs caved in, buildings with missing doors and windows, entire apartment buildings without tenants managing to stand tall against seemingly endless odds. An all-too familiar urban story.

Blanche’s house, the closest thing that I can think of as far as an ancestral home, is located at Moss and Second, right smack dab in the middle of the Medbury’s-Grove Law Subdivisions Historic District It is a two-story four bedroom, craftsman style Bungalow. According to family anecdotes, the house was designed by famed Detroit Architect Albert Kahn for a wealthy Ford executive. Although many of the homes in the neighborhood were built for Ford executives in the nineteen-teens, twenties and thirties, I have yet to find evidence that confirms or denies weather Kahn did indeed design the home. You know how families are.

Digressing back to the dining room, I have always adored the wallpaper.﻿﻿ 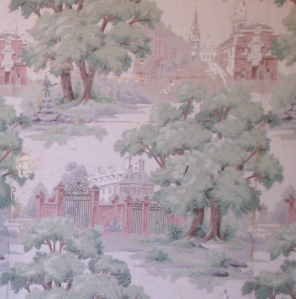 This whimsical scene, with its’ lushly printed trees and almost comically perfect Colonial buildings has served as a backdrop for decades of Blasius family gatherings. It’s likely a machine-made paper, probably from the 1950s, and could have possibly come from the home decor department of any one of Detroit’s famous department stores such as J.L. Hudson’s or Kerns. There is a spectacular amount of family snapshots documenting this wallpaper, too. Here is a photo of my Great Grandma Blasius, Grandma Blanche and Grandpa R.B. sitting in the dining room, dated November 28th, 1974. 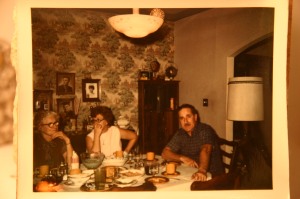 There is something about a good roll of wallpaper that seems to coalesce a space like no family portrait, painting or flat screen can. Although the continual existence of this wallpaper doesn’t hold a candle to anything truly historic it has surely stood the test of time and bypassed decades’ worth of style changes. And let’s be honest: no one wallpapers anything anymore. Wallpaper takes time to hang, it takes hard work to remove and by the time you’ve got the images lined up on the wall pictorial papers are no longer en vogue.

For a historian like myself, it’s nice to have the trifold perspective of old documentation, recent documentation and personal memories. These elements drive preservationists and historians to do what they do, and are the key ingredients in the way that history works, no matter if you are talking about Highland Park or the Blasius family.